Following my previous post on classifying 10K Latin(?) books, I started an automatic process to re-OCR the ~300 works in the set which didn’t have plaintext OCR results already available. About mid-way through the run of this process, I realized that most of these do in fact have some form of OCR available, but only as DjVu XML output from ABBYY FineReader. That means that not only could we potentially use that OCR text for our text classification process, but also that we can compare how that process works with ABBYY’s OCR text versus our OCR results.

This leads me in to the actual problem I want to deal with in this post, which is trying to come up with a method for automatically evaluating OCR quality with no ground truth. Anyone who’s worked with OCR of historical texts knows bad OCR when they see it, but can we come up with a more general approach we can automatically apply to an entire corpus, to automatically find and prioritize candidates for reprocessing? 1

A lot of work has been published on OCR post-correction processes, or quantifying OCR accuracy with ground truth, but I wanted to focus solely on standalone ground-truth-free quality metrics for OCR, for which there appears to be relatively less work published: 2 3

I wanted something that would give me accuracy for a wide variety of languages, with no pre-filtering or a priori knowledge of the language(s) used in a document. I also didn’t want to depend on spatial information or idiosyncratic confidence values from the OCR engine, for maximum portability (i.e. I want it to work on just plain text). My initial thought was to extend the simple dictionary approach with a large multi-lingual dictionary set, though that could be burdensome to do comprehensively. So, I wondered: can we use the existing langid classifier to get a good approximation of OCR quality?

The method proposed here is to use the line-by-line language confidence scores from langid to assign an OCR quality score. Fortunately for us, langid’s normalized confidence scores in line-by-line mode are much more useful for this application than the document-level normalized score. My initial experiments with this approach revealed that there are a number of different ways one could go about using these scores in an OCR quality metric.

My first idea was to classify whitespace-separated blocks of text as garbage/non-garbage using the mean block score and an experimentally-determined threshold, then dividing “garbage” lines from the total number of (non-whitespace) lines to get a “garbageness” score that would be a proxy for OCR quality. The other, simpler approach I came up with was to use the mean normalized confidence score of all non-blank lines; actually what we want is the complement of this value, to get a “mean language uncertainty” score so that a higher value indicates a higher language uncertainty and we can compare it more directly with our “garbageness” score.

Because I want to use this metric to rank OCR results in order to prioritize re-processing, I can compare scores between ABBYY OCR and my OCR under the assumption that my OCR on this data is likely to be better due to the generally abysmal performance of ABBYY on Ancient Greek and Latin. What we want is a good positive correlation between the original score and the score’s improvement in my OCR.

Here are the results of plotting the improvement in OCR quality scores for both “garbageness” and “mean language uncertainty”: 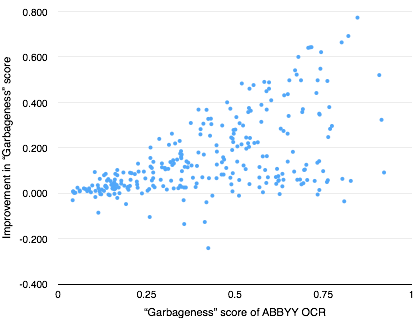 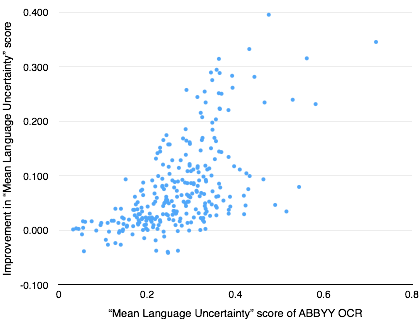 After looking at these graphs, I decided the simple straightforwardness of implementation for “mean language uncertainty” made it a better choice (as there’s no subjective determination of the mean threshold to use for “garbage”).6

Here’s the final version of the Ruby script I came up with for this process:

This script is designed to work on data that has already been processed with langid and combined with the original input, as langid --line -n is the computationally expensive part of this process. This is done with the following very small script:

So you could run this end-to-end with e.g.:

I’m pretty excited about the potential for this. If we have a repeatable, improvable OCR process, and a reliable ground-truth-free way to approximate accuracy, we can close the loop on a workflow for continuously prioritizing, reprocessing, and improving our OCR results.